Start a Wiki
Match 3 is a unique event compared to all other events, giving the player an addictive puzzle experience to try and earn themselves rewards.

The Match 3 Event is an 8 x 7 board filled with pictures of currencies within the game; players are required to make match's of at least 3 related currencies in order to gain experience for that currency to level up. When the currency levels up, the player is rewarded with that currency. The higher the level of the currency, the bigger the reward.

Each currency has a maximum level of 30. Maxing out a currency rewards bonus energy and remaining tiles of that currency need to be removed by the player.

The currencies running in the event:

You begin with 4 currencies that are randomly generated across the board:

Clicking on a tile will either cause that tile to change randomly to another neighboring tile, or it will reward the player with currency EXP IF the tiles had 2 or more of the same currency from an adjacent tile beside it. If the tiles get a match, all the tiles that were matched will change back into a random currency. The random currency changed from a matched tile will not turn into the currency that was matched, unless every other currency is max level. Nevertheless there can only be a total of 4 different currencies on the board. The exception to this is that after maxing out a currency, the remaining tiles of that currency will not automatically disappear.

For example, if a player has the next energy claim ready to go, but misses 5 hours of time, when the player claims the energy it will continue with 3 hours left until the next claim.

Currencies are unlocked through a Total match milestone, as the game keeps track of how many times the player has made a match.

Throughout the total matches milestone the player can unlock the locked currencies in the following order:

All currencies require a different amount of EXP required to level up, Wood being the easiest to level. Once a currency reaches the level 30, it will not appear anymore and be replaced by a new 4th currency. Remaining tiles of former currency will remain until the player removes them.

Unlocking currencies is based on the number of matches the player has made. Focusing on matching more than 3 at once is a great way save energy and gain more EXP. The more the number of matches, the more the EXP gained.[1] Matching more than 3 tiles at once will result in more than the original gain of 5 EXP per tile. You could even focus a match of 3 on the more difficult currencies to level up, while focusing the larger matches on the easier currencies to level up.

If no matches of 3 can be seen, look for the the best, most reliable option. If there's a bundle of 2 currencies with no matches, you can always look for a 100% match tile. When you click on a currency, the tile is forced to switch to an adjacent tile, meaning if it's surrounded by sets of 2 you've just optimized your RNG (Random number generator) with a 100% chance of a match, or if it's surrounded by the same currency. If you're unable to find 100% matches you can always look for 2 or 3 possible matches from a single tile switch.

Some example pictures: (The optimized click is squared in blue)

Optimized by clicking on the AP tile

Optimized by clicking on the gold tile 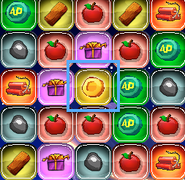 On top of that, it's recommended to focus clicks more in the 'middle' of the board rather than the outer parts. This is simply because if you attempt to click on a currency in the corner, there's no chances of anything from the opposite side affecting the match. If all else fails, head to the sides. Ultimately count your chances and choose what's better.

This event offers Multiple Special One-Time Packs that have a much better reward/cost rate than the average pack. During the event is the only time you will be able to purchase these packs.

Retrieved from "https://iourpg.fandom.com/wiki/Match_3_Event?oldid=18393"
Community content is available under CC-BY-SA unless otherwise noted.