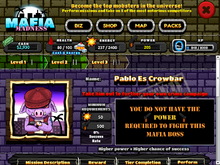 The Mafia Madness event is an energy-based game where the player must perform crime in order to gather resources and defeat the leaders of the mafia.

The currencies running in the event:

Event Currencies used in this event:

Players are given cash, health, energy, power, and XP, required to perform specific (automated) tasks at the cost of Energy. Performing these tasks has a success rate dependent on the player's power[1] and the difficulty of the mission. Each task costs a specific amount of Energy to perform. Rewards are given for each successful task performed, while each time the task is successfully performed the tier percentage is increased for moving to the next tier. Once the tier reaches 100%, the player will be automatically moved up a tier for that mission, giving completion rewards. Unsuccessful tasks will force the player to lose Health.

Players may increase their Power

by purchasing weapons in the shop, or Cash

income by purchasing buildings in BIZ.

If a player reaches 0 Health,

they will not be able to perform any tasks. Players may heal 10 Health at the cost of 5 Energy.

Each time a player levels up, their maximum energy capacity increases every level as shown below: 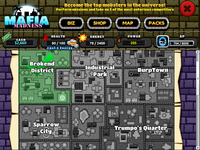 Players may change areas from the MAP. Moving to a different location will allow the player to accomplish different tasks. In order to unlock the next area, the player must first defeat the most recent boss that is unlocked.

Each area has a maximum tier of 5. When maxed, the rewards are massively decreased compared to the regular amount.

Players must claim the income earned from the resources in order to obtain the cash.

The Event Point Recoup system debuted in the second run of this Event. It is an experimental system designed to allow players who missed many of the previous Events to regain some of the missed Event Points. Recoup specifics for this event:

This event offers Multiple Special One-Time Packs that have a much better reward/cost rate than the average pack. During the event is the only time you will ever be able to purchase these packs.

Note: Attempting to purchase 2 of the same pack will only credit diamonds!

Retrieved from "https://iourpg.fandom.com/wiki/Mafia_Madness_Event?oldid=17022"
Community content is available under CC-BY-SA unless otherwise noted.