Hunting is the main activity of Idle Online Universe, and the main source of Gold. Hunting always happens in one of 10 Worlds, that may be chosen by clicking the Activities tab and the Travel icon.

Every World is composed of 10 or more Zones, and each zone houses a different type of Creature. These Creatures must be defeated a certain number of times to open access to the next zone, unless the player has reached inferno mode. Defeating the required number of Creatures in a zone will also reward the player with some AP and Diamonds.

At every 5 zones the Creature will be labeled as a Boss, having 4 times more HP than the common, and an extended kill timer. You can also encounter Treasures, a type of Boss, in any Zone.

To access a World, it is required to defeat all the creatures of the previous world; some Worlds are only accessible at certain Ascension Tiers. After completion of the worlds that are available, the player will be rewarded with a 50% exp boost along the ascension tier.

There is a bonus in exp gained from the creatures every 25 creature levels (usually equating to every 25 zones). The bonus increases for each progressive set of 25 levels. After the bonus is applied, exp falls off at a steady rate every additional level until the next set begins. Due to this it is recommended to farm at the zone where the enemy level is at the highest possible value of

In Inferno Mode, the exp boost stops at level 300 (Inferno 1 Epsilon). Your best tier is then dependent on your party's overall DPS, Auto Upgrades and XP boosts. Every tier will give a significant exp bonus if your DPS is past a certain threshold. Otherwise, an exp penalty will be applied instead. This effect is magnified at every 10th and every 25th tier, which is most likely due to the enemies' additional HP on those tiers. 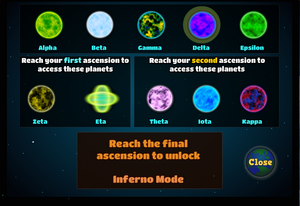