Guilds are groups of players arranged to facilitate the contact between them and help the pursuit of common goals. Guilds also provide various bonuses through the Guild Buildings. It is possible to form parties with other members of a guild through the Member list, in the Guild's main screen if the member has 'Allow Battle Join' ON, which is located in the guild's Manage menu. Each guild is provided with a private chat room that only people within that guild can use. 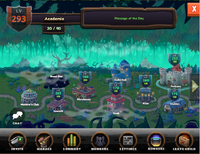 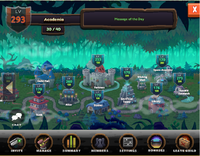 Guilds can be joined from the start: click the green 'Join a guild' tip at the main screen. A list of the open guilds will be shown, and choosing one will make the player a member of that guild. A player must be directly invited to join a closed guild.

The sum of its members' IOU Score form the Guild IOU Score, which is compared with other guilds in the Top Ranks under the guilds list section. The maximum number of players in a guild is 40. 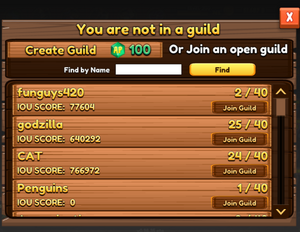 You can level your Guild Hall by completing various milestones such as building levels and number of players within the guild. These guild levels provide Guild Level Bonuses.

Upgrades to guilds may be done by donating Stone

to Guild Buildings in the Guild main page. The donated stone grants personal Guild XP, which can be used on Guild Upgrades. Donations stay with you even if you leave or change guilds. You can remove all your donations from one building once every six days.

Guild bonuses determine how fast you progress in every aspect of the game. It's recommended that you try to join the strongest guild possible. Increase your stone net worth and Mining Depth to fit their requirement.

There are four ranks that guild members can have.

Creator, Leaders and Captains can send invites to players.

Creator and Leaders can set a guild message to be shown on the Main tab. They can also select which buildings are open to investment and set the guild join requirements (or disable joining).

Guild member list with level and stone. Action button on member let you do various things. Click a column header to sort by that stat, and click again to reverse the sort order.

Summary of your guild bonus (does not count building)

Guild-related settings can be found in the Settings menu. 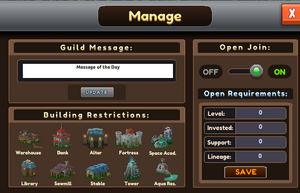 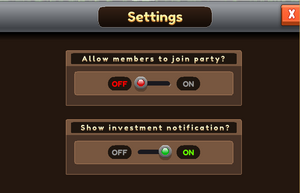