Fishing is an area where the player can obtain Fish Value

In order to fish, the player must select an area in the dock to start fishing from; this has no effect on the results of the cast. When an area on the dock has been selected, fish will randomly appear according to the rarity of fish the player is able to obtain. At any time the player may cast for a chance to catch any of the fish appearing on the screen.

The only use for Fish Value

is in the Sacrificial Hut, which ultimately fuels the growth of Soul Orbs.

from regeneration (can be upgraded up to 500), no maximum for purchased energy. Purchased and regenerated energy are displayed separately at the bottom left.

Countdown Timer: 30 minutes; This timer counts down to the next time the player gets Energy.

Energy given per countdown: 1

Auto Fishing: Automatically catches fish, provided that all fish in the pool have a minimum rarity equal to or above the 'Min-rarity' setting. Without the purchase of a boat, this is set to 1. Auto-fishing will continue even while outside the Fishing window, and the main battle screen will have an icon showing your fishing avatar and the fish you are catching.

Selecting an Area on the Dock to Spawn Fish 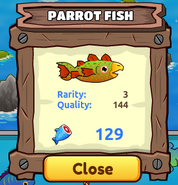 As of v1.14.0, fishing will be simulated while you are offline using the min rarity you have set. By default, the simulation rate, or offline fishing efficiency, is 50%. This means fishing is processed half as fast as if you were online. The rate can be increased with an Ascension upgrade and a VIP upgrade, resulting in a maximum speed of 90%.

Fish spawning is determined by a normal distribution with the following characteristics:

Note that having a Whistle active also adds 0.5 to Tackle Level (not currently mentioned in-game) in addition to increasing Max Rarity by 3.

Due to this complicated relationship, it may not be straightforward which fishing gear is best to upgrade. To maximize the amount of meat you receive for sacrifices, a good set of general guidelines to follow is this:

Note: The maximum upgrade for any equipment is currently capped at level 15. This means that the highest rarity you can catch with a maxed rod, Whistle active and a maxed Fish Orb (currently capped to 7 Star) is only 56 despite the fish rarities in game going up to 60.

Rods improve the potential rarity of fish you can find.

The rarity of potential Fish improves by 3 each level.

Lines improve the quality of fish you can find.

The quality of Fish improves by 15% each level.

The regeneration improves by 4 nets/day each level.

These are minor 'achievements' that reward the player with Upgrade Points when claimed. You can unlock a Claim All feature for 1250 Diamonds

Also, Knife and Boat are permanent.

Fishing Energy is used up as you catch fish.

Increases Max Rarity of fish that spawn by 3, and adds 0.5 Tackle.

Each level increases fish value, and like the boat, also grant fishing energy and days of Whistle. The Knife was changed from a one-time purchase in v1.30.0.

Min-Rarity Cap is the highest rarity you can set Auto Fishing, increased with each Boat level.

Auto Fishing gets a Min-Rarity setting. Once set, it will not catch a fish until all fish in the pool are at or above the value you set.

A redirect to Soul Orbs. For sacrificing only; can not use the offerings until you go to Orbs.