Codes are words or phrases with no spaces which can reward players with Currency, Resource Energy, Card Packs, and/or Rune Fragments when redeemed (previously, they were often randomly generated alphanumeric strings of 30 characters). They are given out on the Idle Online Universe Facebook Page and in #codes in the Idle Online Universe Discord server. Wood and Stone currencies were replaced with NRG shortly after the 3rd Q & A with Ray was released on January 11, 2018.

Codes are released weekly on Sundays and reward various currencies (changed from two daily codes with fewer rewards as of v1.27.0). There is a chance to get a "jackpot" which will be announced in world chat.

Players who buy the 30 Day Pack will receive double rewards and have double chance for increased rewards. Players with a high Lineage Level or Support Level will be able to get higher reward multipliers.

How to redeem a code[] 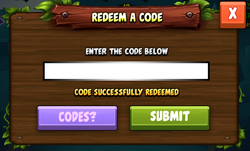 To redeem a code, a player needs to open the Social drop-down menu or press the key 'O', and choose Codes. A pop-up window will appear where the player can input or copy-paste the code. Click the Codes? button to open the Facebook page in a new tab.

Extra spaces are automatically trimmed as of 0.51 Zeta. Note that codes are case sensitive.