The Clean Energy Event or CEE is a different event compared to previous ones; this one is a minigame event. The event ran from Jul 21st to 11am EST (GMT -4), Jul 31st 2015, and again from July 1st to July 31st 2016 as the Reloaded Clean Energy Event.

Starting with a balance of $1,000 players can buy energy sources in order to produce Power, Research and Assets. 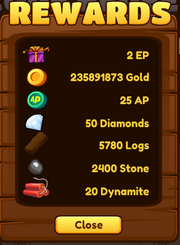 (There was a mistake with the first code)

Assets can be used to upgrade the 3 energy sources that will produce Power, Research and Assets.

Research XP can be used to do some Research Upgrades.

Increase Windmill production by 10% per Level

Increase Reflector production by 10% per Level

Increase research production by 5% per Level

Increase asset production by 5% per Level

Reduce Equip (Windmill/Solar panel/Reflector) cost by 1% per Level, up to Lv75.

The Power generated can be used to purchase Power Orbs and obtain some rewards.

Rewards of the Reloaded Clean Energy event from July 1st to 31st 2016. Rewards for Hard are the same as Normal, except without EP.

Retrieved from "https://iourpg.fandom.com/wiki/Clean_Energy_Event?oldid=17093"
Community content is available under CC-BY-SA unless otherwise noted.