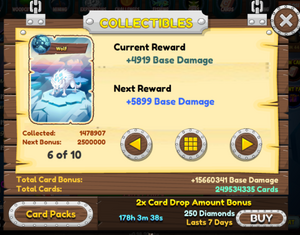 Cards or Collectibles are special drops obtained randomly when killing Creatures while Hunting. Every creature has their own card for a total of 170 unique Cards.

After a certain Card Milestone is reached for each card, players are awarded with a damage bonus.

A 2x Card Drop Bonus can be bought for 250 Diamonds and lasts 7 days.

The Amount of Cards Dropped follows this formula:

It is possible to obtain 2 cards from one drop during Ascensions 1 and 2.

Note: When in a party, the whole party will receive card drops at the same time. The number of cards that drop, however, is dependent on a random generator and therefore is different for each player.

Players can also collect cards by opening card packs. You collect 50% of the cards from a pack as a card you select, 30% as a random card, and 20% as another random card. You can get bonus cards from a pack if your total number of collected cards is over a certain threshold, which ranges from over 62,500 for the Small Pack to over 50,000 for the Inferno Pack.

Sources of card packs are:

Note: It is more efficient to only use packs on Bosses.

Card Packs can also be obtained by exchanging Tiny Packs or buying them directly with Diamonds, at the following rates.