Ascension is the main progression mechanism of Idle Online Universe. At certain levels, players unlock new features and new Worlds through which to progress. 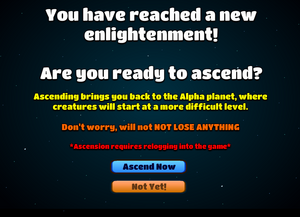 Ascensions were overhauled in v1.30.0. Previously, there were three "Ascension Tiers", referred to as the First, Second, and Third Ascension. The Third Ascension unlocked Inferno Mode, the final state of play. Each Ascension reset the player's progress through the Worlds and unlocked a new set of them. Creatures would become stronger with each Ascension. Ascending required reaching a certain level and completing all the currently available Worlds.

This update also removed the Auto Upgrades and Click Upgrades for Base Damage that were based on the player's level.